After going through several design iterations, Catalus used a one-piece design and produced a part that offered cost savings and a weight savings of 25%.

In our world at Catalus, we often talk about opportunities to convert traditionally manufactured parts to powder metal parts. Generally, we are looking to reduce component cost for our customers by providing a net shape or near net shape part. Sometimes there are powder metallurgy advantages, like lower weight, shorter lead times, appearance in the application, simpler packaging and part profile, just to name a few. Such is the case with a part that Catalus recently launched for one of our customers. This conversion was not a simple one; it took perseverance, creativity, and cooperation. Through this effort we were able to convert this 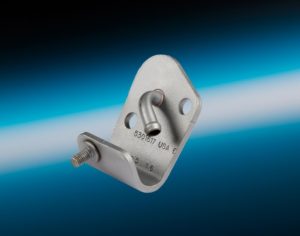 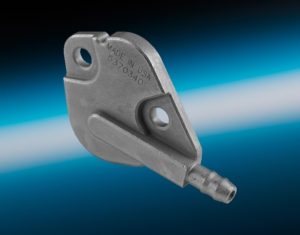 The part is an access cover used to transfer collected oil from the crankcase ventilation system at the top of the engine into the engine block. It had to use an existing bolt pattern and be low profile to allow clearance to the nearby engine control module. The PM part is resin impregnated to help with the machining and to seal the part. The part gets a zinc-nickel plating for corrosion resistance and appearance. The completed parts ship to several different locations both domestically and internationally and many are shipped in returnable containers.

This successful conversion of this part took several design iterations. The first couple of concepts used a PM part and a screw machined nipple threaded into a hole that was drilled and tapped. 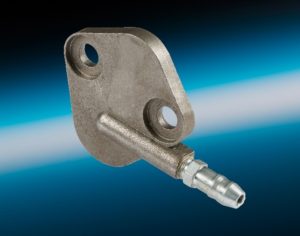 Ultimately when we confirmed that the through hole and the “barb” could be machined in a cost efficient and consistent manner, the decision was made to go with a one-piece design to eliminate a potential leak path.

The PM part in production today offers a weight savings of 25% compared to the original design. With the new profile, the parts can be packed in containers that take up much less space. The overall lead-time was reduced significantly as the original parts were made offshore, and on top of this the customer realized a nice cost savings.

In June of 2019, Catalus was presented with an “Award of Distinction” for this part by the Metal Powders Industry Federation (MPIF).

Catalus would welcome the chance to work with your company on possible PM conversion opportunities.

Work With Us
Go to Top