Recognition as a Top Metallurgy Company & Awards for Manufacturing Excellence

You don’t become an industry leader without acquiring recognition from your industry peers. Over the last 80 years, Catalus has made a name for itself as a top metallurgy company for powder metallurgy manufacturing. We’re proud to share the awards we’ve won with each of our employees and clients, without whom, these honors wouldn’t have been possible. We approach each project differently, and we’re always looking for innovative ways to improve our manufacturing process and earn our place at the top. We want to deliver better products. Through the determination of our team, we’ve been able to produce high-quality, awarding winning work. Ultimately, the goal is to create a better product, and awards are one way to measure whether or not we are meeting that goal. Below is a small sampling of awards we’ve won for our world-class work in powder metallurgy.

In 2015, Catalus was awarded the Award of Distinction in the Automotive-Engine Category. Catalus created a stainless steel flange for, a manufacturer of automotive electromagnetic valves, switches and lighting modules.

Our winning entry is a component that connects and seals a spill valve operating in an automotive fuel system. Fabricated from a proprietary premix developed in order to achieve dimensional stability, the flange is the only PM part used in a high pressure fuel system. To date, we have produced more than 6.0 million of these parts.

The Catalus team accepted the award at the POWDERMET 2015 conference in San Diego.

In 2018, Catalus won in the Lawn & Garden/Off-Highway category for a tilt steering mechanism that is used as a pivot on an ATV/SSV application. This part required significant development time on a specific conventional press on one bottom punch and a stepped core rod. Initially, this was to be a machined wrought part, but in collaborating with the customer, we decided not to use a high density heat treated material. Because of this open dialogue, Catalus was able to help the client realize significant cost savings in a very competitive market.

The Catalus team accepted the award at the Powdermet 2018 International Conference on Powder Metallurgy and Particulate Materials conference in San Antonio, Texas in June 2018.

The winners in the 2019 Powder Metallurgy (PM) Design Excellence Awards competition, sponsored by the Metal Powder Industries Federation (MPIF), demonstrate outstanding examples of PM’s diversity. These component fabricators use PM’s flexibility to push forward new concepts and process controls, and demonstrate the inexhaustible well of capabilities PM can marshal in the service of component design. Designers continue to choose PM for critical applications such as auto engines and transmissions, medical devices, consumer products, hardware, and more.

Nine Grand Prizes and seven Awards of Distinction have been given in this year's competition.

In the Automotive—Engine Category for Conventional PM components an Award of Distinctions was awarded to Catalus Corporation for an access-hole cover used to transfer collected oil from the crankcase ventilation system at the top of the engine into the engine block. It had to use an existing bolt pattern and have a low profile to permit clearance to the nearby engine control module. The PM part replaced an assembly of multiple stamped, machined, and drawn components and resulted in a 27% weight saving 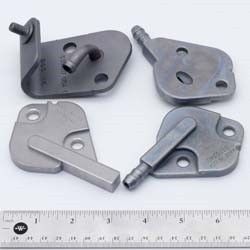 Catalus Corporation is a proud member of the Metal Powder Industries Federation (MPIF) and the Center for Powder Metallurgy Technology (CPMT).